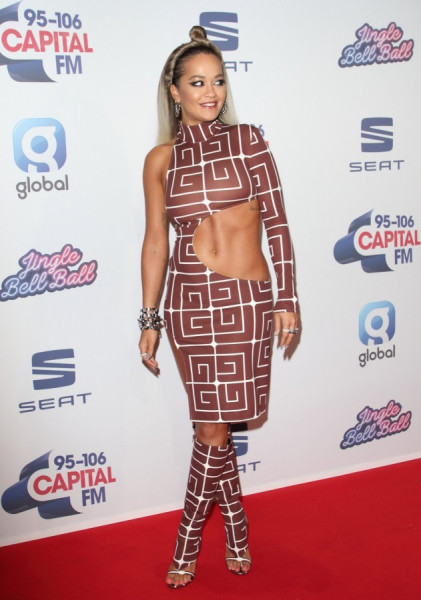 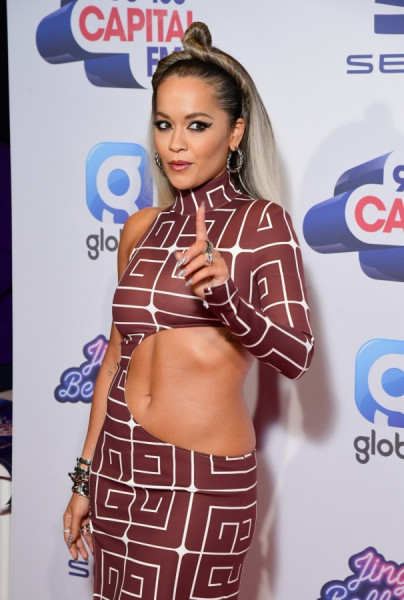 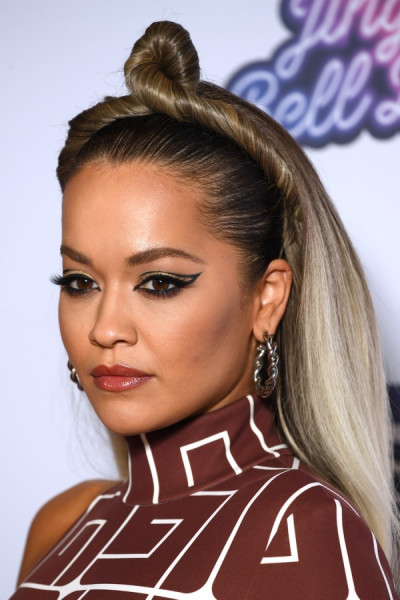 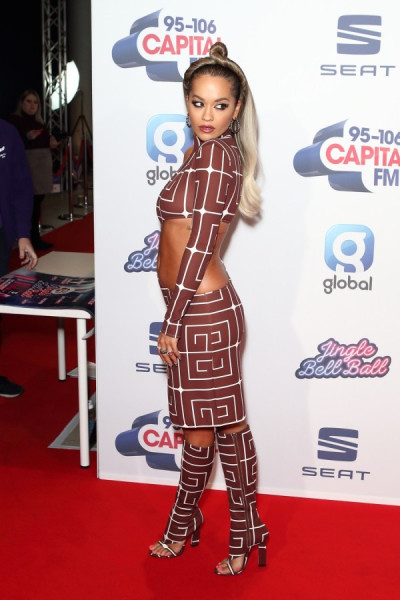 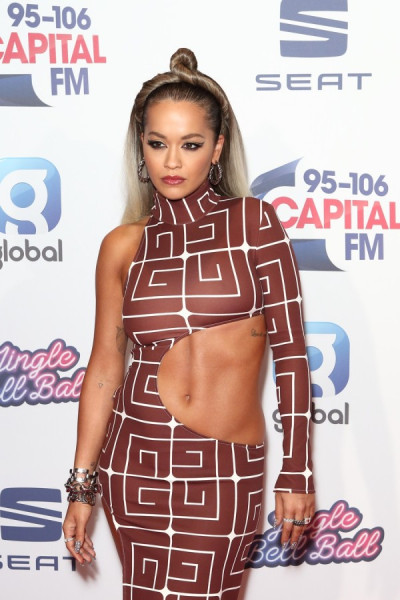 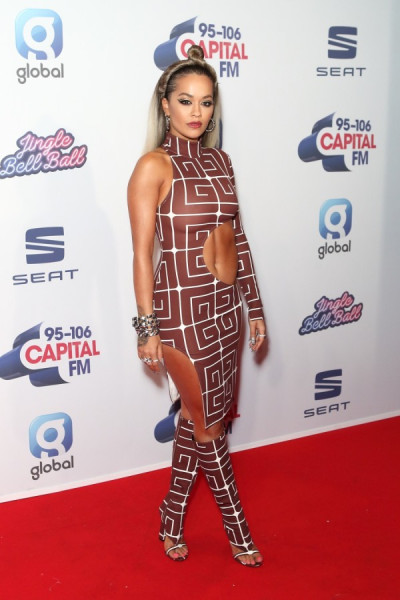 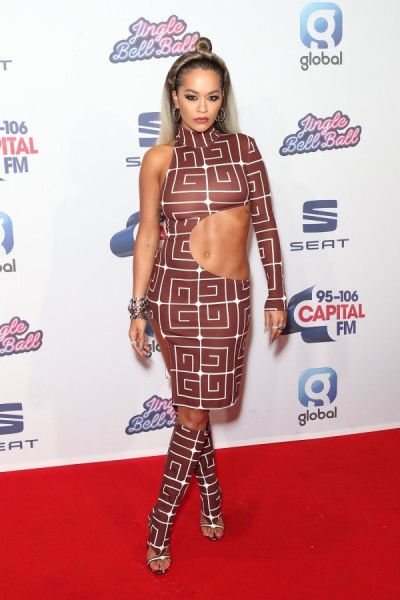 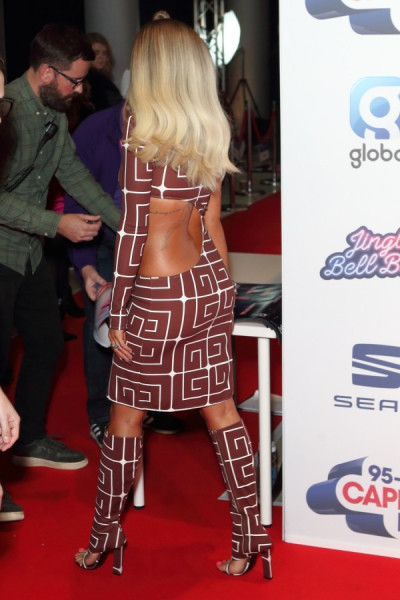 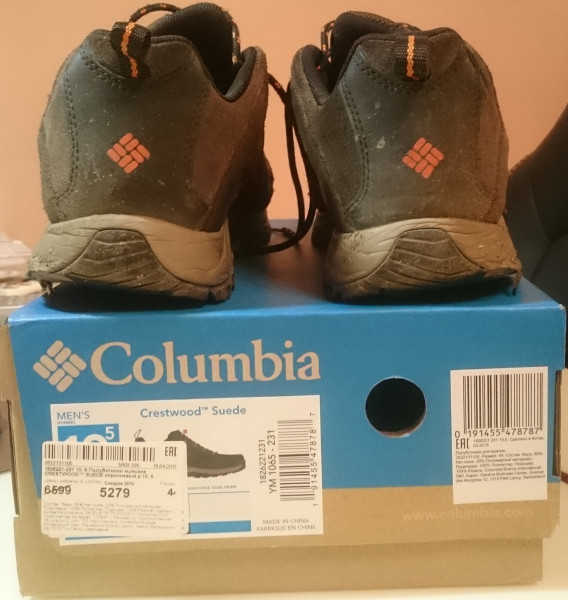 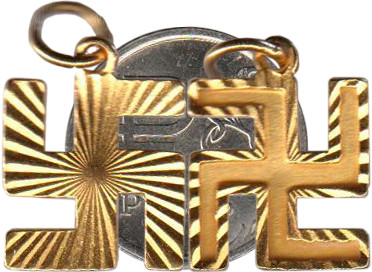 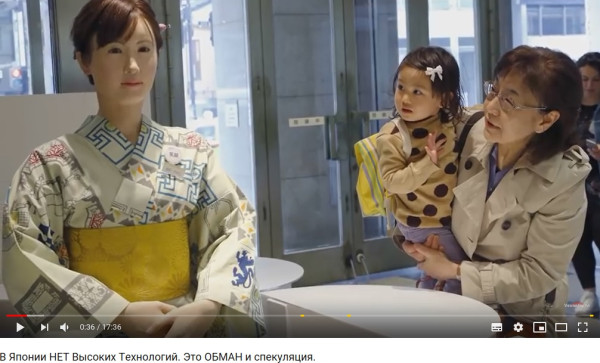 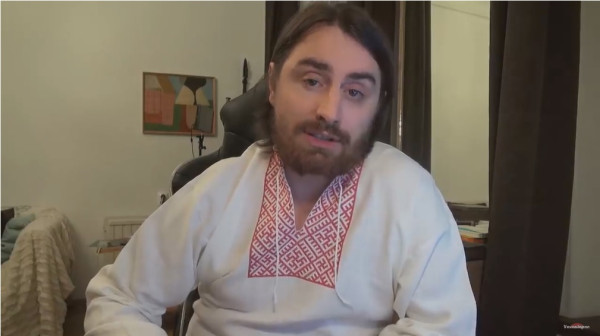 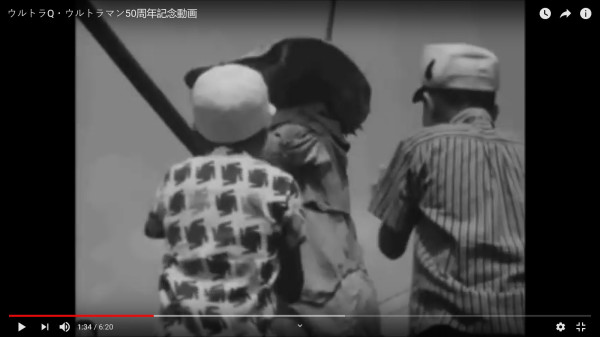 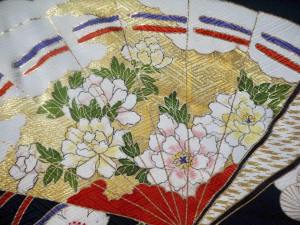 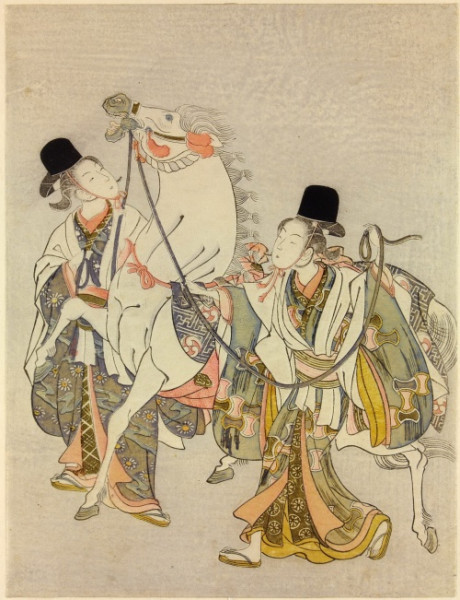 Artworks by Suzuki Harunobu (1724-1770)
Ладно, сворачиваем обильные авторские отклонения отступления и вернёмся уже к сабжу. Повезло ещё, исключительно по своей патологической Лени, не снёс сцЫллу на волшебный сайт и однажды, чисто машинально, я в неё ткнулся. Вау!!11!! Всё работает!1! А значит, пока не поздно, тащим всё (всё максимально авторское - орфография, пунктуация, выделения, цвета и т.д.):
Use of swastika in clothes and costumes
Posted By Sarin on Mar 01, 2013
Swastika- the symbol of peace and harmony was the most commonly used symbol all across the globe. Since it was prevalent in many ancient cultures as a sign of harmony, peace and good luck, it was found on quilt, rugs, pots etc. Swastika was seen in schools, colleges, churches, buildings etc.  Swastikas were woven into clothing. Swastikas were painted onto cooking pots. Swastikas was so universal as a good luck sign that everyone would regard it with the same respect like they normally give to their national flag. Sadly, over the period of time, love and respect for this great symbol, gradually converted into evil and hate, courtesy of Hitler and his party. Through this article, I would highlight the significance of swastika in ancient times by depicting it use among Native Americans art and culture. Swastika is a protected symbol under 1st amendment rights of United States but it is illegal to use this symbol to promote communal hatred, racism, anti-Semitic gesture etc
Swastika in costume of ‘Camp Fire Girls of America’
‘Camp Fire Girls of America’ was founded by Mrs. Charles Farnsworth,  Luther Gulick and his wife Charlotte Gulick in 1910. This organization volunteered young Americans from kindergarten till the age of 21 for social and cultural activities like blood donation camps, environmental care, planting trees, child care, mentoring or teaching young children’s, enhancing leadership and interpersonal skills, etc. This group was the first multicultural, nonsectarian organization for girls and so, was widely popularized as the sister organization of ‘Boy scouts of America’, a group which volunteered only boys for the same purpose. Within three years, this organization became quite popular as more than 60,000 girls registered as member of this organization. In 1975, this organization was named as Camp Fire Boys and Girls, in response to change in their eligibility criteria of including boys. One of the members of this organization “Jacqueline Bouvier” went on to became the first lady of USA. 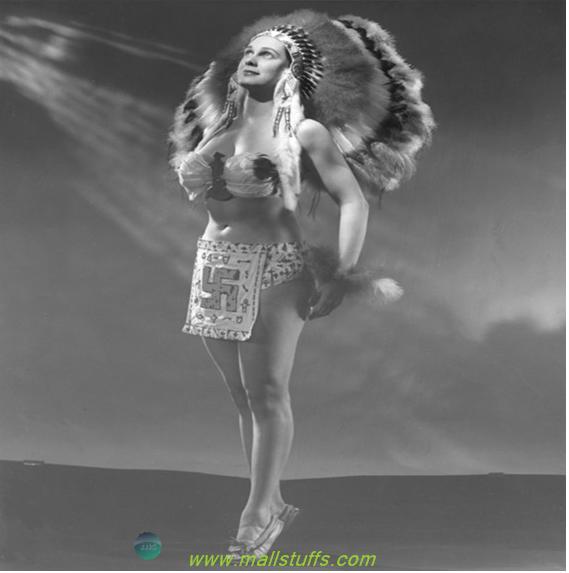 Ceremonial gown of  “Campfire Girls”  in a cultural event.
Swastika in costume of ‘First lady of America’
Born on July 28, 1929, Jacqueline Bouvier Onassis was the wife of John F. Kennedy, 35th President of the United States. In May 1952, she was introduced to john Kennedy by mutual friend cum journalist ‘Charles Bartlett’ at a dinner party. After john Kennedy massive win in November that year, their relationship became serious which ultimately resulted in their marriage on June 25, 1953. After assassination of john Kennedy in 1963, she married Greek shipping businessman Aristotle Onassis in 1965. She remained married till his death in 1975.  For the last two decades of her life, she contributed as the book editor and in preservation of ancient architectural monuments. 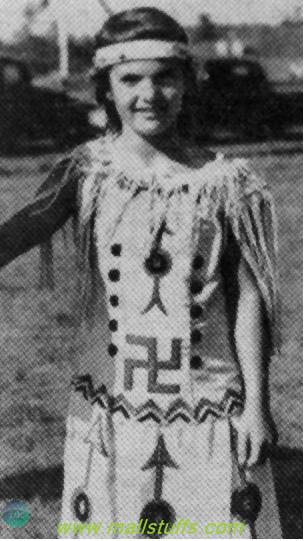 Jackie Bouvier (later Jackie Kennedy) dressed in a costume bearing swastika.
Swastika in costume of a leading actress
Born at Kansas, Rose Marie Grinnell was a leading dancer and actress of the early nineties. She rose to fame in 1928 when she won Miss Original America contest. Her fame as a professional dancer and actress gained wide popularity after she appeared as an Indian dancer in movie "Laughing Boy".  November 15, 1938, edition of "PIC" magazine honored her as Real Miss America. She worked in various Hollywood movies in native roles like as a Polynesian woman in "Son of Fury" (1942), a Brazilian nightclub dancer in "Brazil" (1944), a Mexican waitress in "Anchors Aweigh" (1945), an American Indian in "Unconquered" (1947) and "The Cowboy and the Indians" (1949). She was also a philanthropist and is best known for his charity, distributing sweets, clothes, chocolates etc especially to poor Indian families of the region she was associated with(Kansas, Missouri, Oklahoma, and Arkansas). 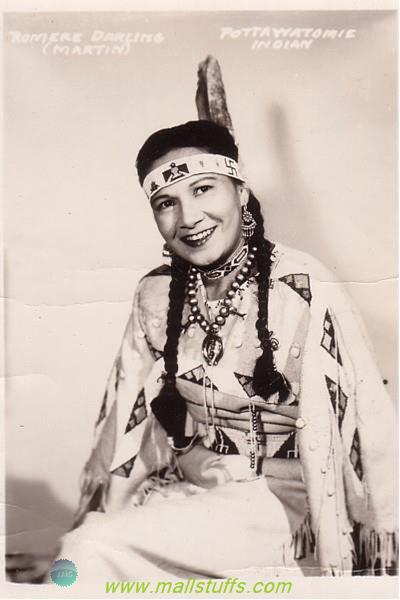 Rose Marie Grinnell, lovingly known as rosie darling with native American costume having swastika symbol
Swastika Barnum Sideshow
Born in 1810, Phineas Taylor Barnum was an American showman and founder of barnum circus in 1871. As a youth, Barnum took up various jobs before making a sensation in 1935, when he exhibited Jocie Heth as a 161 year old slave. As Expected, she was later found to be 80 years old and nurse of George Washington. He became quite popular for his innovative ideas of advertising and attracting audiences in the 1850 while managing the American tour of Swedish singer ‘Jenny Lind’. Till 1855, He tried various businesses and failed every time before reopening the American museum and organizing the most renowned circus (Barnum and Bailey) of its time. Main attraction of this circus was an elephant named ‘Jumbo’, purchased from London zoo despite the protest of then British queen ‘Queen Victoria’. After his death, circus continued for a generation or two before collapsing down in the modern era of art and entertainment. 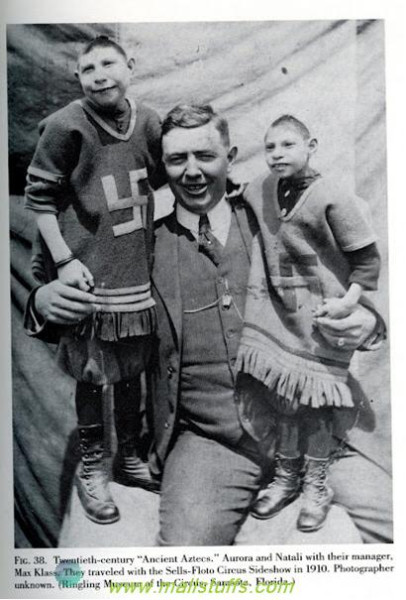 One of Barnum famous attractions, “the pinheads” bearing swastika
Swastika Coat of Arms Sonora
Coat of arms has been an important symbol of Mexican culture  and politics for centuries. Mexican considered coat of arms has important religious connotations while few communities symbolized it as the symbol of good over evil. Even the Mexican government seal, usually seen in government official documents issued by state, federal or municipal authorities are embossed with coat of arms in the upper part of the document. 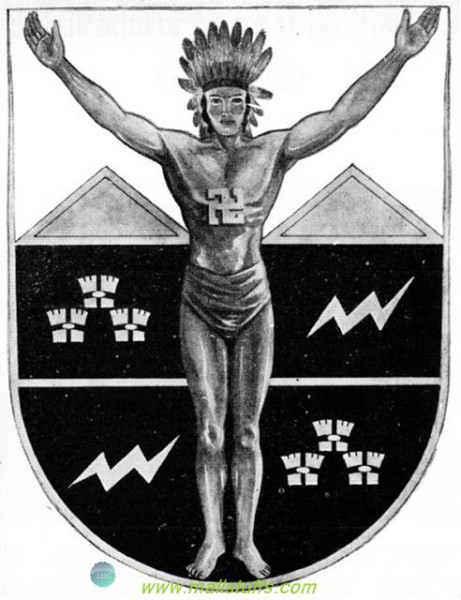 1930 Sonora Coat of arms with swastika, Mexico
Swastika costume in Halloween
Halloween is one of the most popular festivals of United States, especially among the young ones. This festival gained its popularity from the 1978 blockbuster Halloween, after which the festival became synonymous with contemporary horror and terror.
Halloween, formed from two word ‘Hallows’ and ‘evening’, is an annual function where all the saints merge together to have a grand feast. According to scholars, Halloween is possibly influenced from early pagan culture with roots in harvest festival and land of the dead festival.
In this festival, young kids dress themselves in clown or witch monstrous costumes. Typical Halloween activities include disguise, playing pranks, costume with pumpkin or egg head, lighting fires, visiting haunted sites trick, scaring others, watching scary movies, narrating horror stories, etc 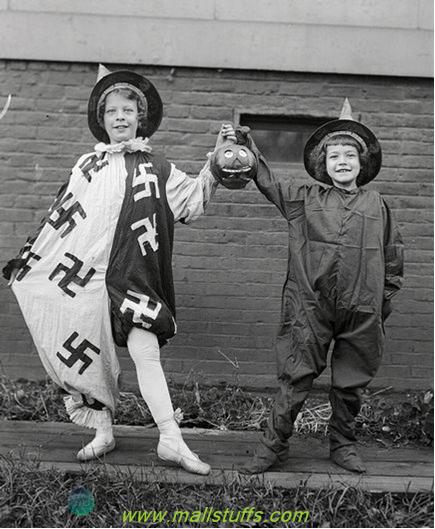 Halloween costume with good luck ‘swastika’ sign
Swastika on costume of oldest Indian
John smith was believed to the longest living American Indian. He was locally known as Gaa-binagwiiyaas meaning, “ flesh peels off”, also commonly referred as -bah-nung-we-way, Ka-be-na-gwe-wes, Kahbe nagwi wensKay -meaning "Wrinkle Meat", "Sloughing Flesh", or Old "Wrinkled Meat". Though his family members claim him to be 137 years old at the time of his death, Federal Commissioner ‘Ransom J. Powell’ recorded him to be 88 years old arguing that "His old look was because of the disease”. 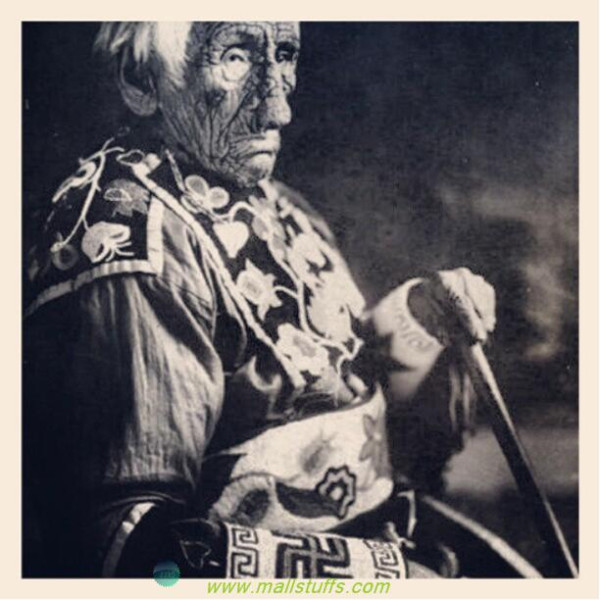 Native American, whose life spanned three centuries (born in late 1700s, died early 1900) wearing a costume with swastika sign
Swastika on costume of Charles Thompson
Born on 22 November 1894 at Penshaw, County Durham, Charles "Tommy" Thompson was a very good sailor and his sailing qualities made him Flag Lieutenant  of various admirals before aiding the then Prime Minister Winston Churchill. He actively demonstrated against human rights violations and was the strong supporter of poor Indian tribes. As a leader of Celilo Village, Thompson regulated access to the most productive fresh water of the region. He opposed the construction of Bonneville Dam and Dalles Dam, which would have impacted the local fisherman livelihood and business. On his death, both Indians and non Indians, numbered in thousands, paid their respect in his funeral ceremony. 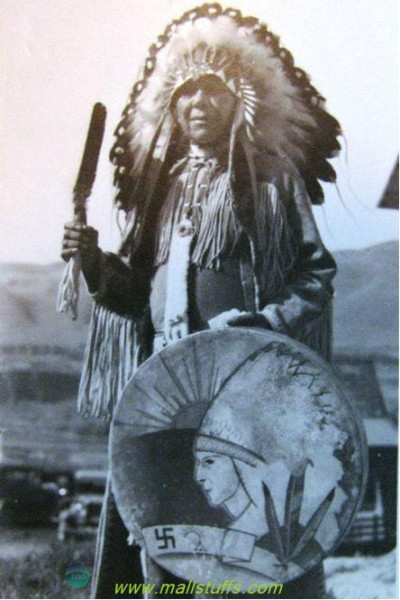 Costume of swastika with Native American swastika near his longhouse at Celilo Falls, Oregon
Very ancient pic of a group enjoying picnic at Belvedere
Belvedere, an affluent city in state of California, is one of the highest income cities of California. This city is said to be civilized by red Indians in the early 18th century. Below you can see Native American school kids posing for a photo 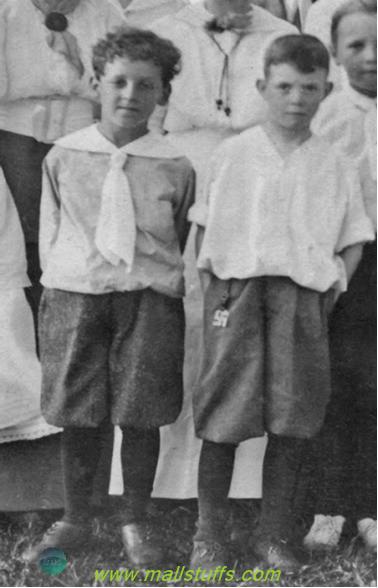 1916 Group photo at Archie Swail's farm in Belvedire
Such costume or clothe bearing swastika symbol is very rare and uncommon in America. Sadly with the collapse of Native American culture, swastika symbol is not considered auspicious anymore.
Conclusion:
This article is intended to reclaim the lost significance and importance of humanity earliest symbol ‘Swastika’. Swastika is derived from the Sanskrit word “svastika”- "su" meaning "good," "asti" meaning "to be," and "ka" as a suffix. Swastika signifies the symbol of good luck, prosperity, peace and fortune. After its association with German Nazi party, this ancient symbol has faced a sad transition from a good luck symbol to symbol of evil and adversity. Swastika is still widely used as a good luck symbol in Asian countries like India, China, Japan, Korea, Thailand, Vietnam, Indonesia etc. 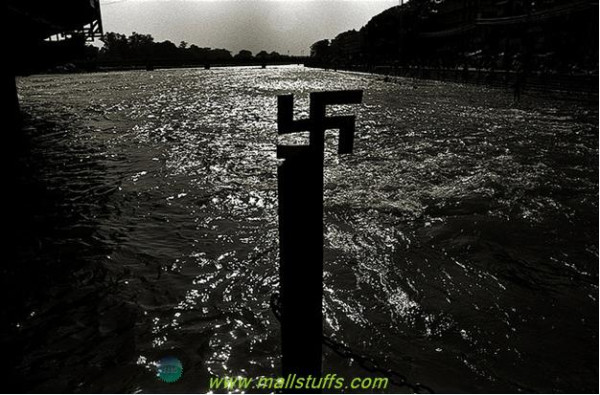 Eye catching view of Swastika at sacred river ganga
This symbol has a great spiritual meaning and significance in Hinduism and its derived religions like Buddhism and Jainism.
Note: Images used on this website are either a production of Bhaktivedanta Book Trust(http://www.krishna.com), Iskcon Foundation or were found in google search under "Free to use and share". If any of the images presented here violates copyright issues or infringes anyone copyright or are not under "Fair use", then please bring it to our notice. Read Disclaimer for more.
* * *
От себя добавлю: Отоварится всем этим барахлом можно на исторической и фактической родине автора в специализированном шмоточном бутике: 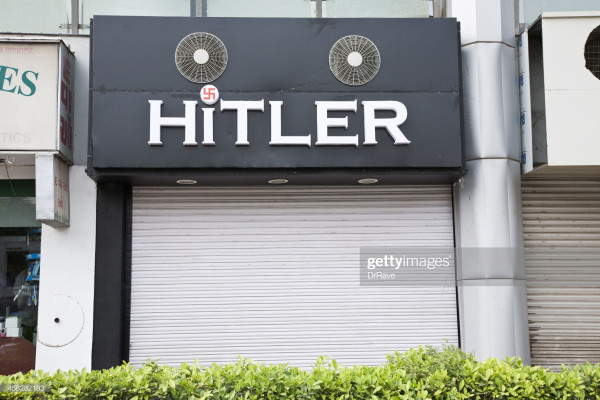 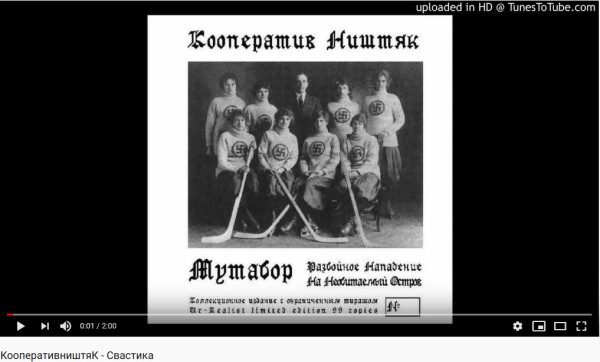 Posts from This Journal “卍” Tag