The coinage of the Kunindas:

Until the reign of Amoghbhuti it seems that the coins circulating among the Kunindas were the silver drachms and tetradrachms of the Indo-Greeks. The first native coins of the Kunindas were produced during the reign of the King Amoghbhuti (late 2nd century-early 1st century BC), though some numismatic authorities consider them to be later issues and date them to ca.20 BC-80 AD. The coins, silver drachms, were influenced by the numismatic model of the neighbouring Indo-Greek kingdoms, but the design was purely native, incorporating Buddhist symbolism such as the triratna, deer, Lakshmi, swastika etc. These coins typically follow the Indo-Greek weight and size standards (drachms, of about 2.1 to 2.2 grams in weight and 19 mm in diameter), and their coins are often found together with Indo-Greek coins in hoards, such as those of the Yaudheyas, or the Audumbaras. They represent the first effort by an Indian to produce coins that could compare with those of the Indo-Greeks.

The coins are among the most beautiful cons of the early India, in my opinion. The design is complex, resulting in crowded dies, but it is very attractive, with the full-breasted, wide-hipped Lakshmi holding a long lotus flower possessing a lot of charge. The bilingual inscriptions indicating the clash of the Indo-Greek and native cultured just added to the charm of these coins.

All the silver drachms of the Kunindas are rare - they rarely make it to the Western market, unsurprisingly, and are not well-known among collectors, though a few examples appeared recently on CNG and Spink. The retail price (as of 2007) for the coins of "common" types varies, but the usual range is 150US$ to 200US$ for coins in VF-EF condition. I have never seen the coins of rare types (with swastikas, standards or other symbols on obverse fields) for sale, but I would estimate the retail price for them to be 200-300$ for coins in VF-EF.

Because of the obscurity of these coins, it is difficult to find any comprehensive information about them. While all these silver drachms have similar inscriptions on both sides and an identical design, the design and location of the control marks on obverse (and a standard on reverse) can vary. Some types were published previousely - Boppearachchi reports two types (one of them probably misinterpreted - see catalogue, below), Mitchiner (Ancient & Classical World) reports five varieties, and most other catalogues report only one or two varieties. I have listed 18 types, at least 10 of which were never previousely published. No collector or dealer that I've known put together a collection of these coins, so I thought creating a webpage listing the unknown and (previousely) unpublished types would be of help to the collectors of Indian coins. Along with the pictures of different varieties, the drawings of the symbols for both the obverse and the reverse are shown, and the relative rarities for the different types are indicated. If you ever encountered any types not listed here, please drop me an email - I would love to hear from you.

I wanted to list, very briefly, the few errors appearing in the Mitchiner catalogue in the "Kunindas" section (not really of much importance, but thought I would mention it)

1. The "two cobras" symbol appearing above the deer NEVER have a dot between them

2. The "standard" symbol on the reverse comes in two different varieties (with a straight shaft and one that splits into two curves).

4. The Prakrit inscription is incorrectly transcribed in Mitchiner (letter "h" in "Rajnah" omitted) (corrected below).

This is the list of some of the symbols encountered on the silver drachms of the Kunindas:

"Tree-in-railing" - the common ancient Indian symbol. Appears on the reverse of this type only.

"Two cobras" - always appear between the horns of the deer. I am not sure about this symbol, but this is how it is described in all references.

"The Y-symbol" or "the standard" - a very common ancient Indian symbol, usually described as a "standard", but the precise meaning of this symbol is unclear.

"The lotus flower" - appears on the obverse in two varieties, with a dot in the middle and without (see catalogue).

"The Peacock" or "the Chalice" - uncertain tiny symbol appearing on the obverse of some very rare coins. I think it is a drawing of a small peacock, but it might be a depiction of a cup or a chalice.

Uncertain symbol, appearing on some Indo-Greek coins. Reported as a "vase", but I am not sure anyone knows what this one is, exactly.
Silver Coins:
ACC #1a.1 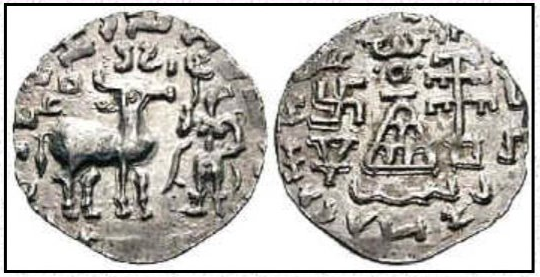 The type without any additional marks on obverse. "Straight shaft standard" on reverse. Comes in both a neat style and a very crude style, thought to be of later manufacture (?). 18mm, 2.2 grams. Surprisingly rare, published in Mitchiner ACW, but nowhere else, it seems. (Image courtesy CNG).
Mitchiner ACW #4445.
ACC #1a.2 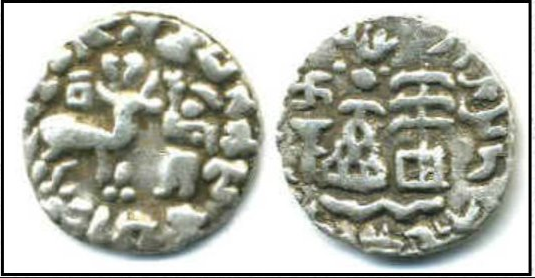 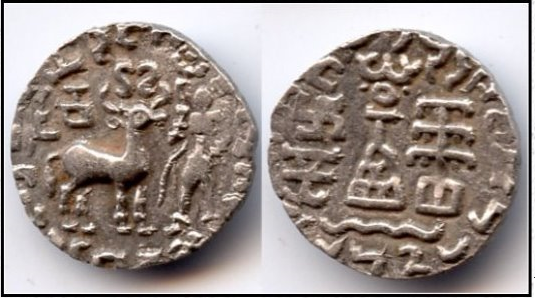 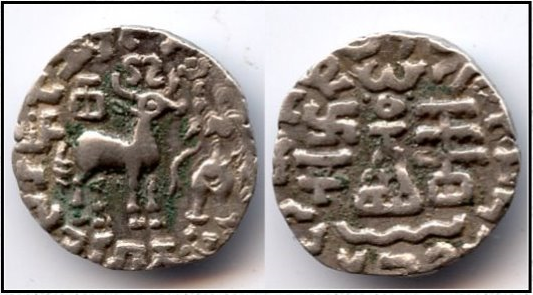 The type without any additional marks on obverse with with a "Vase" split in two by a prominent horizontal stroke. "Straight shaft standard" on reverse. 18mm, 2.2 grams. (Image courtesy ACC). Completely unpublished, much scarcer than the preceeding type.
ACC #2 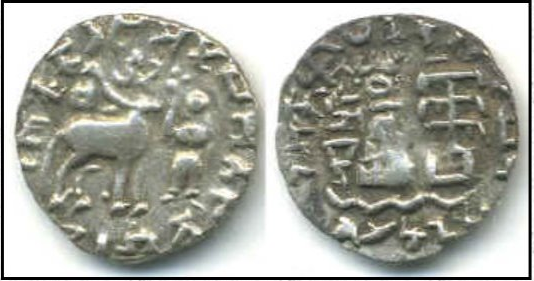 Same as ACC #1, with the exception of a dot between deer's legs. 18mm, 2.2 grams. Unique? The coin pictured is the only one published or known (?). (Image courtesy ACC). Unpublished.
ACC #3 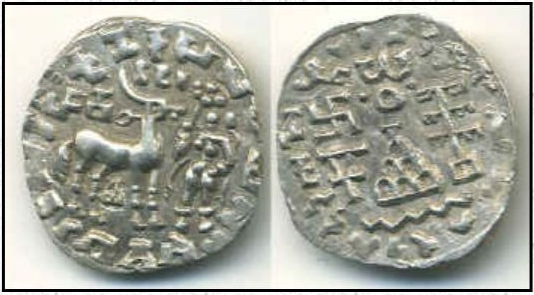 Three-arched hill without a crescent. 18mm, 2.2 grams. Rare. (Image courtesy ACC).
Unpublished, but coins of this type are easily confused with the similar ACC #4 is not examined closely. They might actually be the same as the next type, but with an unengraved crescent on top of the hill.
ACC #4 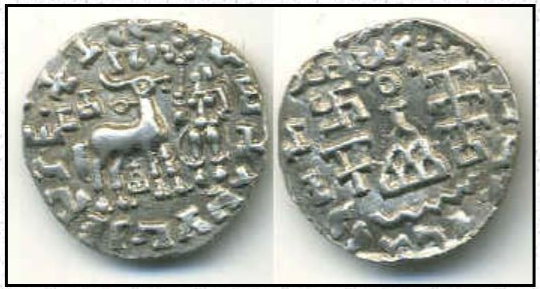 Three-arched hill with a crescent and without any additional symbols. 18mm, 2.2 grams. Rare. (Image courtesy ACC).
This type is the most "common" type for this issue (although, please keep in mind, all these coins are still very rare).
They are usually neatly engraved - I have never encountered a very crude example of this type.
Mitchiner ACW #4440-4441.
ACC #5 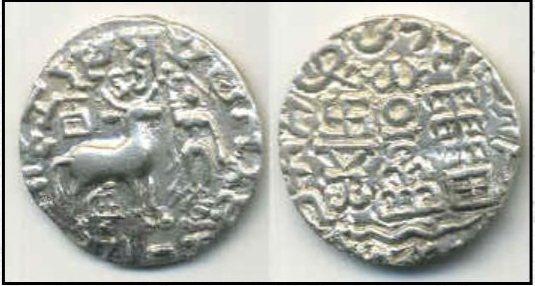 Same as above, with the exception of the "split" standard on reverse.18mm, 2.3 grams. Unique? The coin pictured is the only one published or known (?). (Image courtesy ACC). Unpublished.
ACC #6 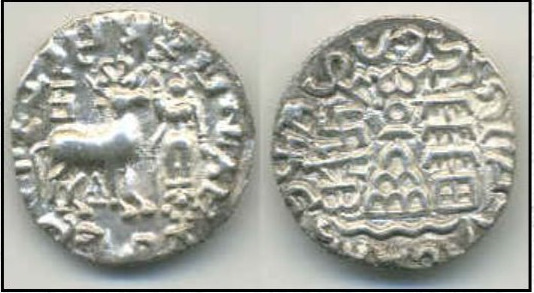 Same as above, but with an additional "lotus" symbol below Lakshmi (within the inscription).18mm, 2.2 grams. Unique? The coin pictured is the only one published or known (?). (Image courtesy ACC).
Unpublished.
ACC #7 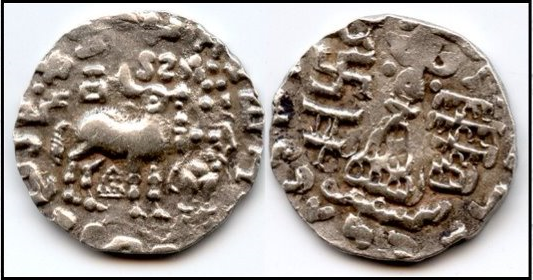 Same as above, but with a five-arched hill on obverse. This type is reported in W.Pieper, Kuninda, #2, the second coin known is pictured here. (Image courtesy ACC).
ACC #8 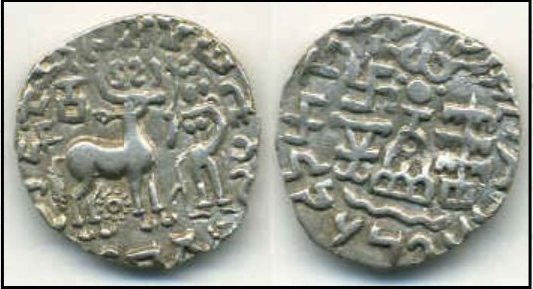 With a "lotus" symbol below the deer.18mm, 2.2 grams. Unique? The coin pictured is the only one published or known (?). (Image courtesy ACC). Unpublished.
ACC #9 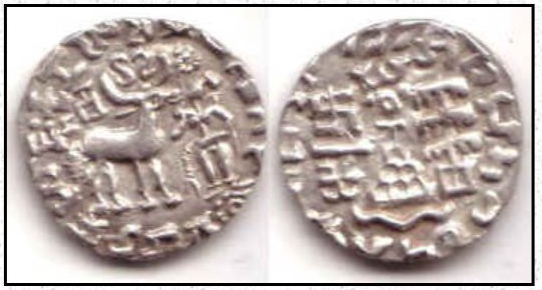 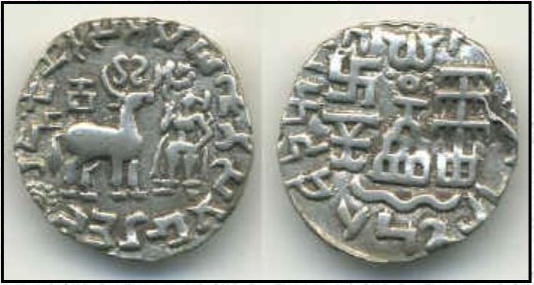 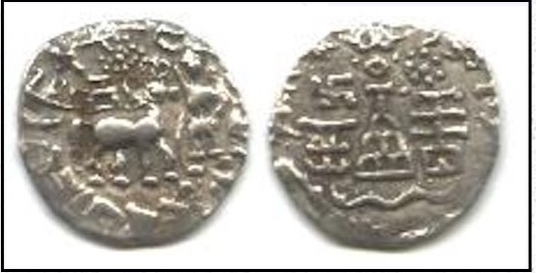 A unique example, sent in by an anonymous collector. With a "lotus" symbol in the upper central field on obverse and upper right field on the reverse.
ACC #11 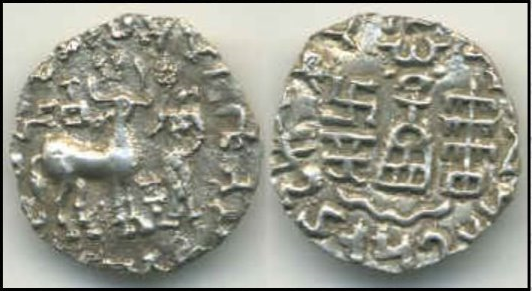 With a "standard" symbol between the deer and Lakshmi.18mm, 2.2 grams. Unique? The coin pictured is the only one published or known (?). (Image courtesy ACC). Unpublished.
ACC #12a 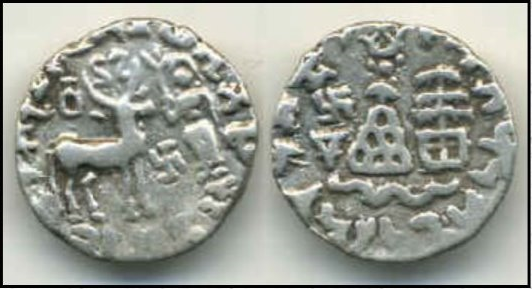 With a "swastika" symbol between the deer and Lakshmi.18mm, 2.2 grams. Unique? The coin pictured is the only one published or known (?). (Image courtesy ACC). Unpublished.
ACC #13 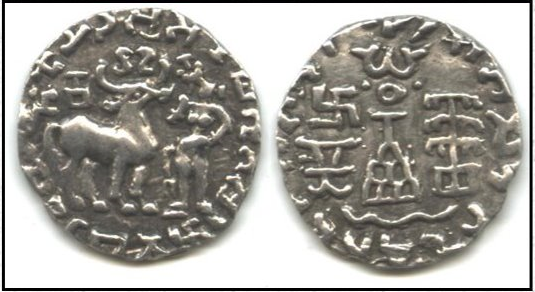 With a "peacock" (or "chalice") symbol between the deer and Lakshmi.18mm, 2.2 grams. Extremely rare. The coins pictured are the only ones published or known (?). (Image courtesy ACC). Unpublished.
ACC #14 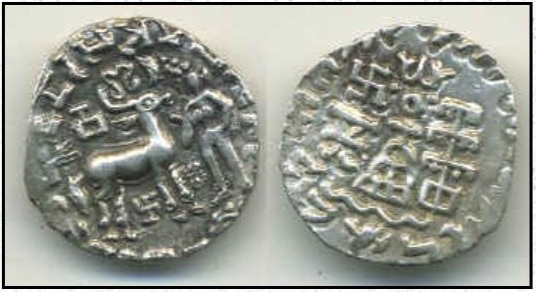 The symbols are reported in Mitchiner ACW (#4442) as "swastika and three-arched hill". The Swastika is unambiguous, but the hill is tiny, and unclear on the Mitchiner plate coin - to me, it looks more like a small peacock (like on the previous type). 18mm, 2.3 grams. Extremely rare type, one of the scarcest in the series. (Image courtesy ACC).
ACC #15 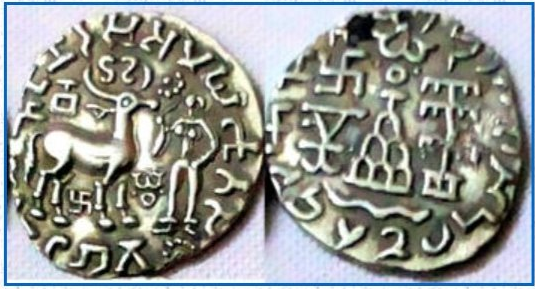 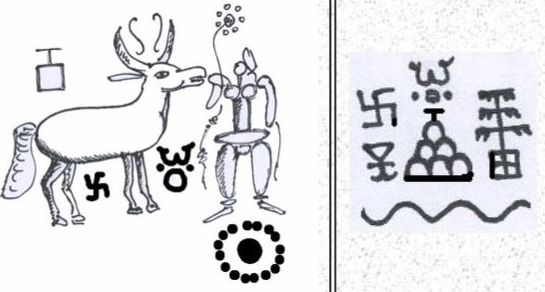 With swastika under deer, lotus under Lakshi and a nandipada symbol between the deer and Lakshmi.
Unpublished and very rare.
ACC #16

Three-arched hill below the deer and an "apple" between Lakshmi and deer. Unique? The coin pictured is the only one published or known (?). (Image courtesy S. Kumar).
Unpublished.
ACC #17 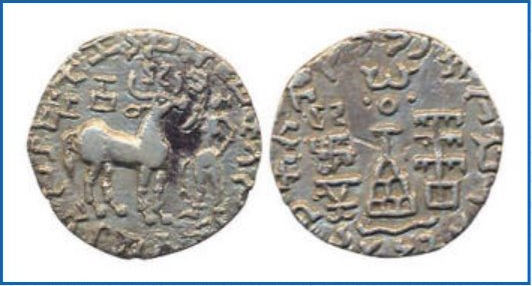 The obverse is of the common type 1a, but the reverse has two additional cobras over swastika. I know only of one coin of this type. Unpublished and unique.
Bronze Coins: All these bronzes with the deer on the obverse standing left are extremely rare.
* * * 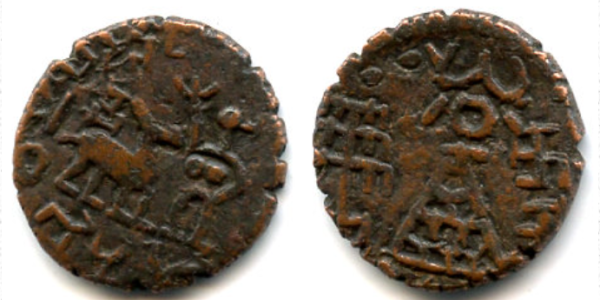 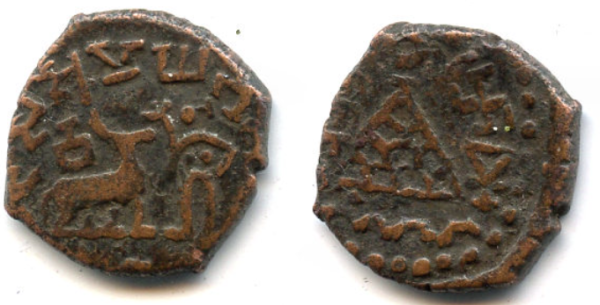 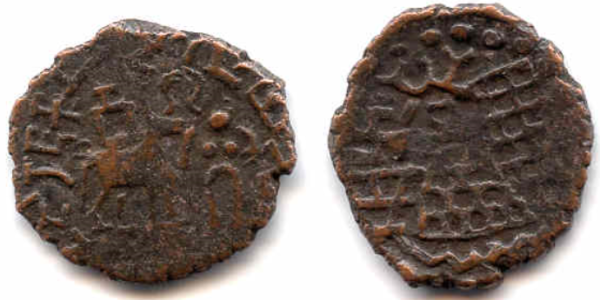 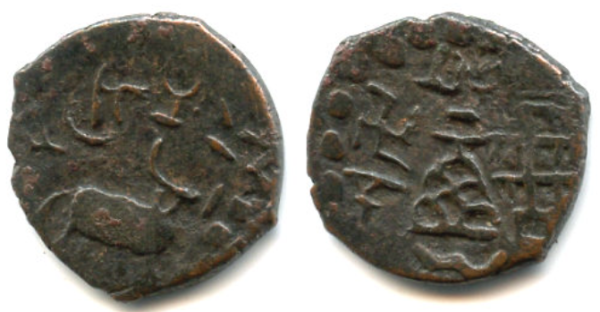 Probably the most common of all the bronze types.
* * *

Same as the coin above, but without the "box" above the deer on the obverse.
* * * 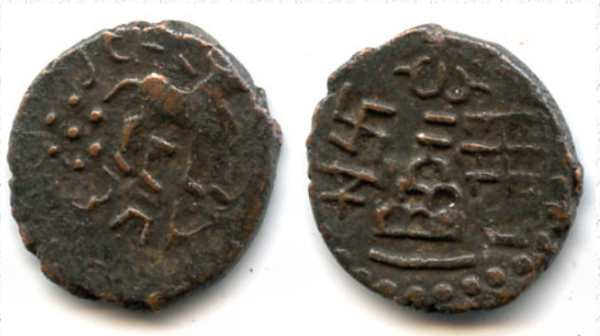 Same as the coin above, but with a :lotus flower" behind the deer, paralleling similar silver issues. I know of only one specimen of this type.
Tags: Сoins&Вons, 卍
Subscribe

Recent Posts from This Journal