TYPE II- STANDARD & GOAD https://sirimunasiha.files.wordpress.com/2010/07/es_goad.jpg
Coin No1- Sinnamukattuvaram :This symbol is placed on the obverse in a slanting position over and parallel to symbol No 2, which is much reduced in size. On the reverse it appears with its head to the left between the railed swastika and the caitiya.
At an SLNS lecture on 15 Nov 2000, Wng Cdr Raja Wickremasinghe on Dating Acient Sri Lankan Coins issued an photo copies of coins. One of these coins has the standard and Goad symbol between the Elephant and Railed swastika on the obverse These are shown below.

A set of coins from Tissamaharama Ruhuna purchased by Raja Wickremasinghe.
GOAD TYPE III
No 2- Nindavur:The symbols apapers of either side with its head to left , but more elaborate size. Both coins the elephant is large: on the reverse the horns of the Nandapadi symbol do not touch the circle, but are joined there too by a triangular projection on either side
Few other coins of this type has been published.
At an SLNS lecture on 15 Nov 2000, Wng Cdr Raja Wickremasinghe on Dating Ancient Sri Lankan Coins issued an photo copies of coins. There were two coins , the second photo has only the symbol of an Elephant Goad or an battle-axe[Keterai] These are shown below.

DATING OF COINS
In the above lecture by Wng Cdr Raja Wickremasinghe collated the Data based on the Dr SU Deraniyagalas Addendum II Archeological Survey Dept. Sri Lanka 1992. Two large Elephant and Railed Swastika coins were found in layers 59 and 52. These layer were carbon dated to 150 – 100 BC. 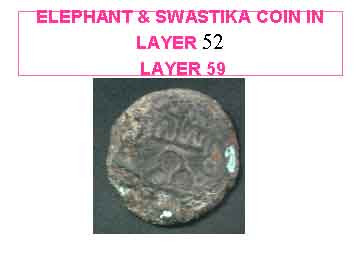 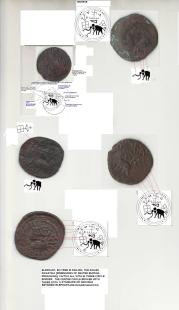 COIN TYPEs
HW Codrington in his supplement to Chapter III has a paragraph Section 11a. He describes two new type of coins or a hydrid and an other type.Many more coins have been found they are published below.

Until a better identification is made will call it an elephant goad, this symbol is also found on the re-struck coins published by DPE Hettiarchchi. 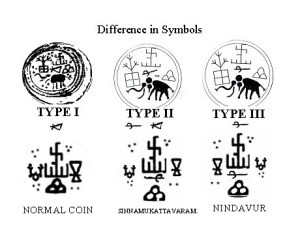 NORMAL COINS- TYPE I
COIN SIZE AND WEIGHT
On many of the coins the die is partly off the flan, leaving a blank margin on one side. The thickness of the flan varies, as does also the size of the die ; a number of the coins thus have the design on the obverse compressed, resulting in a squat form of the swastika. These are marked in the following list with a star :-
The following are from Kantarodai :–


Variant;-As normal type, but on reverse symbol on left is No. l.
Diameter, l.49 x 0.49 inches weight 247.8 Colombo Mus.49
(b) Parker’s “Anuradhapura coin” (Ancient Ceylon, p. 504). –
Obv. is complete. Above the elephant is back is symbol a, slightly tilted upwards on the left ; close to it and over the elephant’s back is the tree and enclosure. The caitya is in the usual position, but the swastika, which is squat, is placed over symbol a and the caitya. There are groups of three dots (1) to left of tree, (2) to left of head of swastika, and (3) to left of elephant; single dots.(l) to right of swastika railing, and (2) below the caitya.
The reverse is worn.
Diameter mean: l.47 in. Weight :233 gr.
(c) Parker’s ” Mihintale coin’s (ib., p 505) As last.
Obv : Elephant’s tail is not forked ; no dots to left of elephant ; two to right of caitiya, and two to left of swastika rail.
Rev: Three dots to left of caitiya. The variations may be due to wear.
Diameter : 1.3l in, Weight:264gr.
(d) On reverse symbol to right is modified; over but not touching a circle without a dot in the centre the lateral prongs instead of being curved extend horizontally outwards an then turn upwards at right angles. On either side of the circle and beneath the angle of the prongs is a short line pointing downwards and outwards, In the caitya the lower cells are contiguous.
Diameter : 1.41 in. weight 250.5 grs
11. As in normal type, but the side symbols c and dare counter-changed ; the Nandipada symbol has a small triangle projecting on the left side covering the junction of the circle left –pl 8. 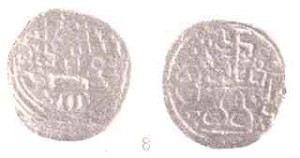 Variant -As last, but with both symbols upside down. The Nandipada symbol sometimes has a triangular projection similar to that just described on either side. The projection on symbol c is to the right. Colombo Mus 48 ; fine die, corroded green. In good condition on Obv., but worn on rev, Taurines on tree enclosure. Diameter : l.35in. Weight 220.l gr. Pl.9.

A set of coins from Tissamaharama Ruhuna purchased by Raja Wickremasinghe. 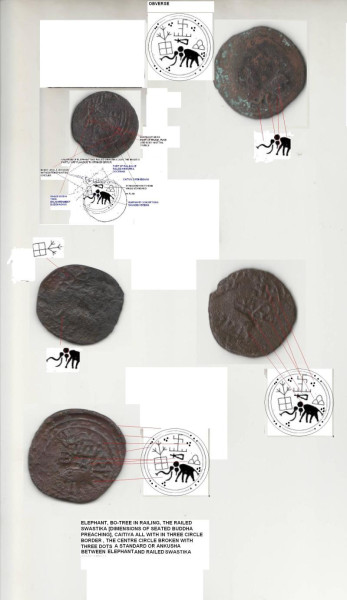 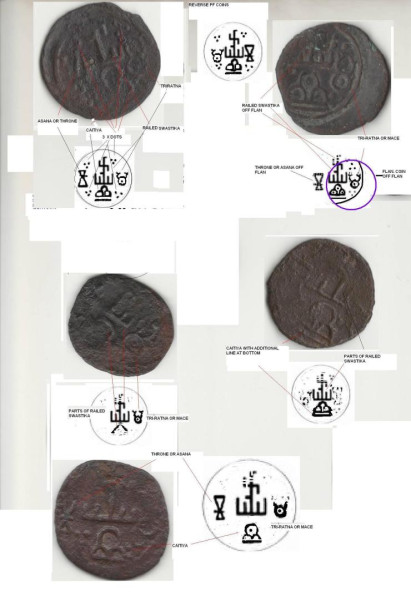 「Картинка кликабельна. Coins in the Colombo Museum」
The coins were found during excavation at Salgaswatte Anuradhapura and the strata in which they were found was dated to 300-100 BC, A hoard of these coins were dug up at Tissamaharama, a photo of the broken pot is shown below

8. DEVANAMPIYA TISSA 307-267 BC – second Son of King Mutasiva – His close friendship with Emperor Asoka in India led to the introduction of Buddhism by Mahinda in 247 BC. His sister Sangamitta arrived with the branch of the Bodhi Tree from Buddha Gaya. The tree still exists as the oldest historical tree in the world. She also established the order of the Bhikkuni’s (Nuns).
All ancient Sri Lankan kings were believed to be future Boddhisatavas.There is a popular belief that the statue of a Bodhisatva at Mihintale Hill at Anuradhapura is that of King Devanampiyatissa.

Head of Bodhisatva now known to the people as that of King Devanampiyatissa.

This large handsome coin is believed to have issued by King Devanamptiyatissa to Commemorate the propagation of Buddhism in Ancient Sri Lanka by Rev Mahinda. The Railed Swastika on the reverse side of the coin is the Royal Emblem of the first dynasty of kings. This is found on the reverse of all coins of the other kings of that period.
The standard symbol or the Dhajaya found between the Railed Swastika and the Elephant is believed to be the sign symbol of king Devanampiyatissa.

Mr P Weerasinghe in another RAS journal describes the symbol between the Elephant and Railed Swastika , now believed to the standard or Dhaja[ flag] which was used as the sign manual of King Asoka and King Devanampiyatissa too used this symbol. He furnished epigraphical evidence of a Maha-tissa in Inscription No 368[ IC- Volume I- S Paranavitane] . He believes he is Devanampiyatissa. This inscription has 3 other symbols, two of which may be the similar to those on the reverse of this coin.
ANCIENT NUMISMATICS-ELEPHANT AND SWASTIKA
COINS & CURRENCY OF CEYLON – H.W. CODRINGTON

Chapter III – An attempt update his great work with the latest finds and other relevant material.
ELEPHANT AND SWASTIKA
The arrangement of symbols around the railed Swastika appears to follow predetermined specification. The symbols are arranged as under.

FINDS
The large circular coins now described were found at-
DESCRIPTION
The normal type has-Obv. : Elephant walking to left trunk extended tail ending in triple fork; occupying the whole of the base; above, arranged are four symbols :


The spaces are filled up with single dots or with groups of three dots, usually placed as follows :-


The whole is within a double circle enclosing dots and lines. Pl 7


The spaces are filled as on obverse, usually as follows :-

The whole design is enclosed within a line circle.