Swastika coin of Gardner Hardware company
Founded in the early 1910's at Massachusetts, Gardner Hardware was the manufacturers of hardware products like screws, hammer, iron products etc. Below is the 1915 brass made Swastika token issued by the Gardner Hardware Company as a part of their advertising campaign. Giant right facing swastika enclosed with other good luck symbols and good luck wish at the bottom embellish this coin. Face value of this coin was 10 cents.

Swastika coin of Cedar Bluff Auto Company
Founded in the early 1920's in Allentown of Pennsylvania state, Cedar bluff was the reputed auto shipping company that provided car accessories and efficient transportation services to its customers. Flint being the birthplace of 'general motors' that launch Chevrolet generation of cars, you can see the symbol of Chevrolet in the below swastika coin of Cedar Bluff Auto Company. At the bottom are the swastika and other good luck symbol with their business motto "Lowest prices, fully equipped quality car" just above it. This coin was worth $1 on every purchase of items worth $20 or above. 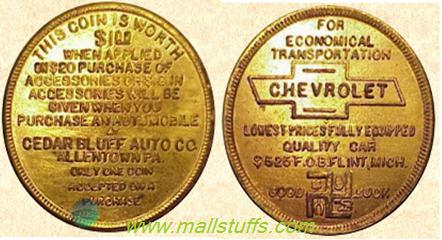 Swastika good luck coins of Keystone Laboratories
Founded in 1923 at Memphis city of Tennessee State, the company was the leading manufacturer of spiritual supple, religious products, cosmetics, and hoodoo for American-African market. This company is active even today and produces products like Soaps, deodorants, shampoo, hair gel, tooth powder etc. This company is actively involved in various charity/community based initiatives like free education for needy, colleges for blacks (Negros) etc.
Below image shows the good luck swastika coin designed by Morris Shapiro, founder of Keystone Laboratories. On the left, you can see the front side of the coin where a husband is kissing her bride with the message "Happiness kills hoodoo. On the back of this coin (right of above image) is a mahatma seated on a giant elephant along with incense sticks, leaf clover, wishbone, horseshoe and runic symbols. 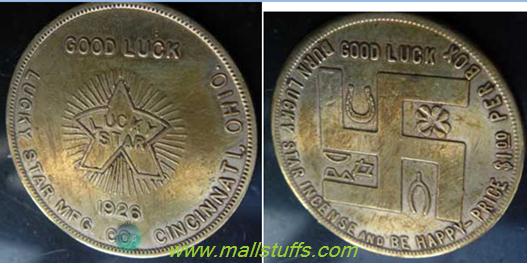 In the above coin, you can see the company name at the centre, inside the lucky star radiating light in all directions. At the bottom is the company name followed by the city and state of their base location. On the top is the good luck message/wish. On the reverse side, there is a huge swastika surrounded by sacred symbols and message to kindle the incense sticks of lucky star company priced 1$/box to bring happiness and prosperity. Below are few more of their coins with sacred swastika symbol. 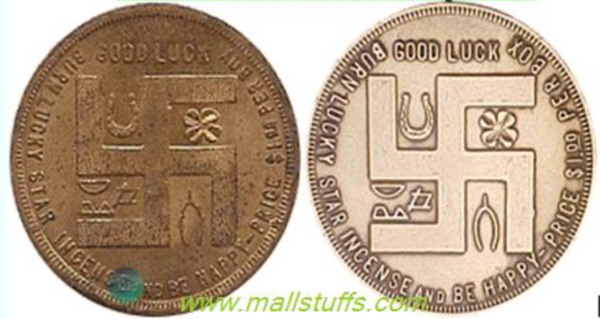 This company was one of the first to follow the labor movement also known as short-time movement or eight-hour day movement or 40-hour week movement. This movement ensured that the employees enjoy their work-life to the fullest by following the daily schedule of Eight hours labor/work, Eight hours play/recreation and Eight hours sleep/rest. Below was the coin given by lucky star company to all it laborers/employees. A hand with a hammer signifies “By order of the ruling/company authority”. Reverse of the coin was imprinted with swastika and other good luck symbols. 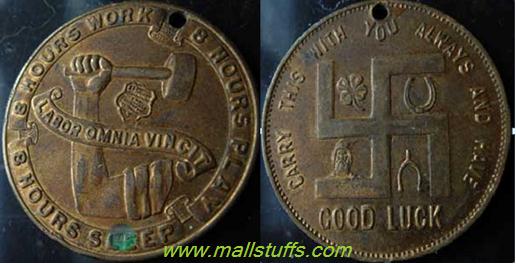 Below you can see another lucky star coin with the message “The lucky hand” on top of a big hand, perhaps a Native American way of showering blessings, success and prosperity. Also, there are other symbols like Aladdin lamp, nail, number 14 inside heart (most likely a valentine day symbol) and a message “Easy life”. Back (right side of below image) of the coin was imprinted with a large horseshoe enclosing swastika & leaf  clover and a wishbone and rabbit foot outside the horse shoe. 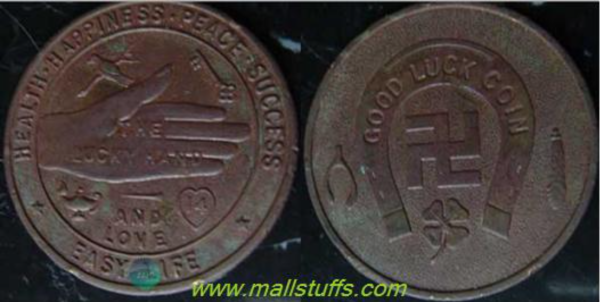 Below is the classic swastika bronze coin, generally called as the swami coin. Manufactured in 1930, this was one of the preferred swastika coins of lucky hand company. It says "The All Seeing Eye - guards you from Evil", perhaps to indicate that the blessings of swami would protect you from all evil. Rays of light coming out of the eye divide the coin into nine parts, each embedded with good luck symbols like heart, key, elephant, wishbone, four-leaf clover, feather, horseshoe, and swastika. Swami on the other side of the coin is shown as a fortune teller glancing at a swastika imprinted crystal ball. Message “Good luck will accompany the bearer” grossly indicates that the fortune/destiny of the one who bear this coin would be filled with good luck and prosperity aided by the blessings of the swami. 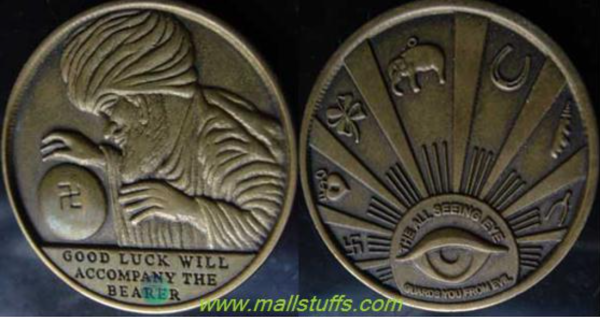 Below is another swami token that is slightly smaller than all other coins. Backside of this coin is similar to the above coin except the message at the bottom that says the coin to be blessed with the magical powers of the orient. Front of the coin is imprinted with the blessings of health, happiness and wealth forever. 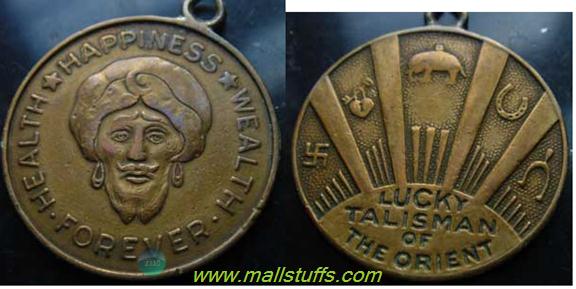 Swastika coin of RIV Bearings
Below is the swastika good luck of RIV bearings, one of the leading manufacturers of small and medium sized bearings. Company logo is printed on the front side of the coin whereas the reverse side of the coin is engraved with the message of owning this coin to have prosperity and good luck. Like any other coin, back of this coin has swastika and other good luck symbols. 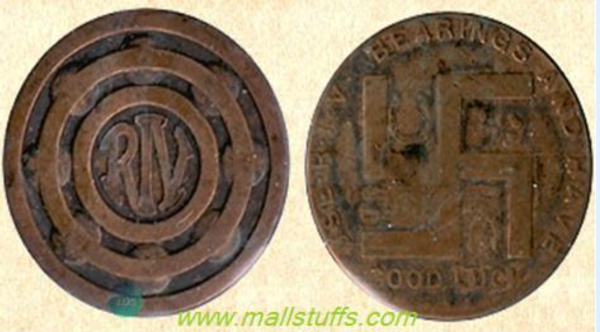 Swastika coin of Waterloo gasoline engine company
Founded in the 1910’s at waterloo in Iowa state, Waterloo Gasoline Company was named as John deere Tractor Company in 1918. Larger in size than the penny, swastika coins of Waterloo Gasoline Company used right facing swastika as a good luck token along with leaf clover, wishbone, horseshoe and set of some building like symbols. Top of the coin reads “Membership emblem of the Don’t Worry Club”. Other side of the coin says "Waterloo Boy Gasoline Engines Are Sure To Bring You Good Luck” 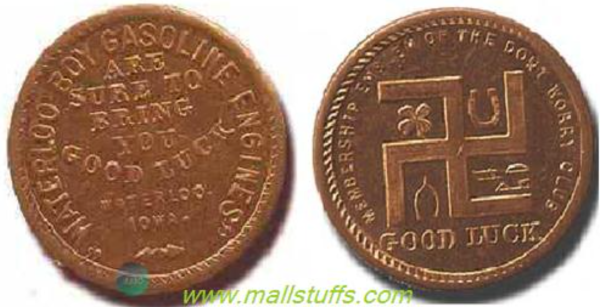 Swastika coins of Shuron Firm flex Shock Absorbers
Founded at Geneva in New York City, Shuron Firm flex Shock Absorbers was one of the foremost manufacturers of Shuron firmflex shock absorbers and shock absorbing glasses. Below swastika coin shows the giant swastika with other good luck symbols at its four quadrants. Company name is imprinted at the borders of the coin and the back of the coin looks like a design of its shock absorbers

Swastika coin of Stewart-Warner company
Initially known as Stewart and Clark Co, Stewart-Warner Company was founded by John K. Stewart and Thomas J. Clark in 1905 at Chicago city. It was focussed on producing automotive parts like speedometer, O&T tubes and radio parts. With annual revenue of $330 million in 1970's, it was one of the most successful automobile companies of USA. This coin was released in 1932 depicting the stable recovery of stock markets that crashed in 1929. This swastika coin merged with Jewish symbol 'star of David' says 1932 to be "The End of the Depression"
Тут сила воли моя кончилася вся,- И больше терпеть это надругательство над ни в чём неповинном материалом я уже не собираюсь. Срать мне на авторский замысел халтурщика! Вот образцы из личных запасов: 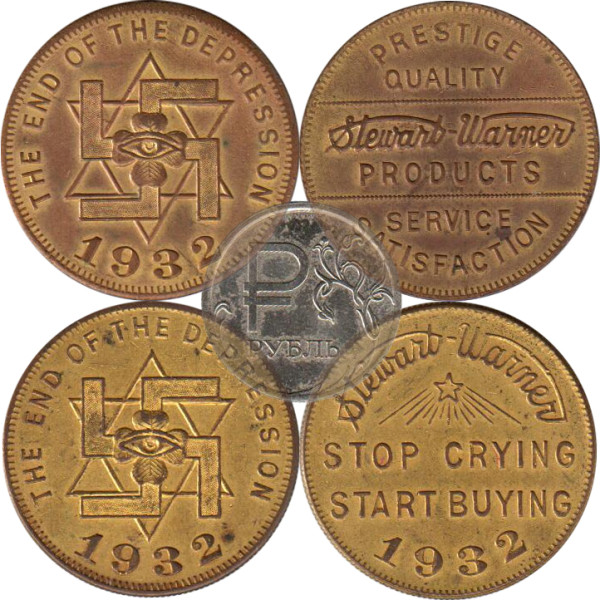 Conclusion
This article is intended to reclaim the lost significance and importance of humanity earliest symbol Swastika. Swastika is derived from the Sanskrit word svastika, "su" meaning "good," "asti" means "to be," and "ka" as a suffix. Swastika signifies the symbol of good luck, prosperity, peace and fortune. After its association with German nazis, this ancient symbol has faced a sad transition from a good luck symbol to symbol of evil and adversity. Swastika is still widely used as a good luck symbol in Asian countries like India, China, Japan, Korea, Thailand, Vietnam, Indonesia etc. This symbol has a sacred spiritual significance in Hinduism and its derived religions like Buddhism and Jainism
Note: Images used on this website are either a production of Bhaktivedanta Book Trust(https://www.krishna.com), Iskcon Foundation or were found in google search under "Free to use and share". If any of the images presented here violates copyright issues or infringes anyone copyright or are not under "Fair use", then please bring it to our notice. Read Disclaimer for more.
Tags: Сoins&Вons, 卍
Subscribe

Posts from This Journal “Сoins&Вons” Tag